Even if your organization is not ready to ‘go social’ there are three critical reasons you should secure your name, business name and close variations of it across digital and social media platforms.

What would you do if a crisis broke out and you were forced to go online to defend your reputation only to discover someone else owned accounts in your name, possibly even the hijacker?

This risk can be mitigated and in an interconnected world driven by technology should be an integral part of corporate governance.

One reason that should motivate you to sign up for social media regardless of your attitude towards it is the proliferation of parody accounts.

On the lighter side good parody accounts bring colour to online life. They are the equivalent of the funny extravert at the office who can lift the mood of everyone around them.  Parodies gain loyal followings and are highly valued, so much so that platforms have developed guidelines for creating them.

For example, the parody account of Elizabeth Windsor, Queen of the United Kingdom, has over a million followers and is labeled fictional, as per Twitter’s guidelines.

The Queen satirizes world events; her tweets are often funny and generally harmless as in the case of her recent April’s Fool joke, in which she announced her abdication.

However, organisations must guard against the kind of parody that makes them look out of touch or worse, damages their reputation.  Even when parody is not nasty it can be inconvenient.

For example, in Victoria in 2103 when the then Premier Ted Baillieu unexpectedly resigned his successor @DenisNapthineMP announced on Twitter “at least I’m not burdened by high expectations.”

The announcement was made by the “not currently the Member for South West Coast in the Victorian Parliament and Premier of Victoria” fake account.

This account was set up within the Twitter guidelines but it was the last thing a party knee-deep in crisis needed. A political party is a brand, securing the names and titles of party representatives like business trade marks prevents them from being misused.

The reputational risk for parody accounts increases when they are mistaken by legitimate news sources as the real thing. Not only is the intent of the original spoof amplified but also the “mistaken identity” creates a new story and news cycle.

In the case above, a TV news program tried to communicate with the new Premier through the account before being pointed in the right direction by a user.

Even established, well-regarded media outlets have been known to get it wrong. Last year the CNN and Huffington Post reported stories based on tweets from a fake North Carolina Governor.

The error provided additional fuel for the spoofer, who used the event to reinforce the importance of source checking.

There are different views on how to deal with impersonation. Some people are happy to let a parody account run alongside their own and consider it a compliment. But businesses may have a legal obligation to manage them. In Australia, for example, once a business has registered a trade mark it is responsible for protecting it.

Social media platforms already have processes in place to deal with violations.

On Twitter brand mark and trade mark complains; breach of privacy; copyright complaints; impersonation and name squatting are all violations of its terms and can be reported.  Twitter also allows you to verify that you are who you say you are if your account is at risk of being parodied. For example, the blue tick next to the Australia comedian Dan Ilic’s account name, confirms it is really him. 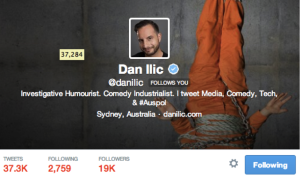 Twitter’s verification system however is less than perfect. For example, in 2012 the platform infamously verified the fake account of Rupert Murdoch’s now ex wife @Wendy_Deng (although it was subsequently rescinded). At this time you cannot apply directly to Twitter to verify your account and so there are many genuine accounts that remain unverified.

Facebook allows users to verify accounts but distinguishes a verified from a fake account, which means having an account to compare it with in the first place.

Twitter and Instagram only accept violation reports from people who are signed up for their services. This is just one more reason to ensure you have a defensive presence that you are able to activate if required. Imagine having to sign up for a platform while in the chaos of a crisis.

I believe many businesses would feel more comfortable moving into social media if platforms offered verification (even as a paid service), as that would enable them to better manage associated risks.

Because in Australia only 30% of small businesses and around 50% of medium-sized businesses have a social media presence and not all of those monitor what is happening in social media, an organization may be parodied without even being aware of it.

Organisations can use a range of tools, including free and paid services, to increase their awareness of what is being said about their brand or business and audit its use. I believe the risk committee of the Board should request monthly social media monitoring and audit reports. These are not onerous to produce and given the range of tools available, can be tailored to suit the budget.

Securing assets takes time as some platforms only allow one account per email address. Your IT people may have a solution like using Gmail aliases (check the terms and conditions of the platform first) and I am hoping that in the future platforms will recognize and adapt their offering to take business needs into accounts.  In the meantime, given the risks, it is time well spent.

Make sure you secure –

This list is by no means exhaustive, but it’s a start.