Department of Premier and Cabinet

Brief: To increase the visibility and profile of the Victorian Honour Roll of Women and building an ongoing alumni community. 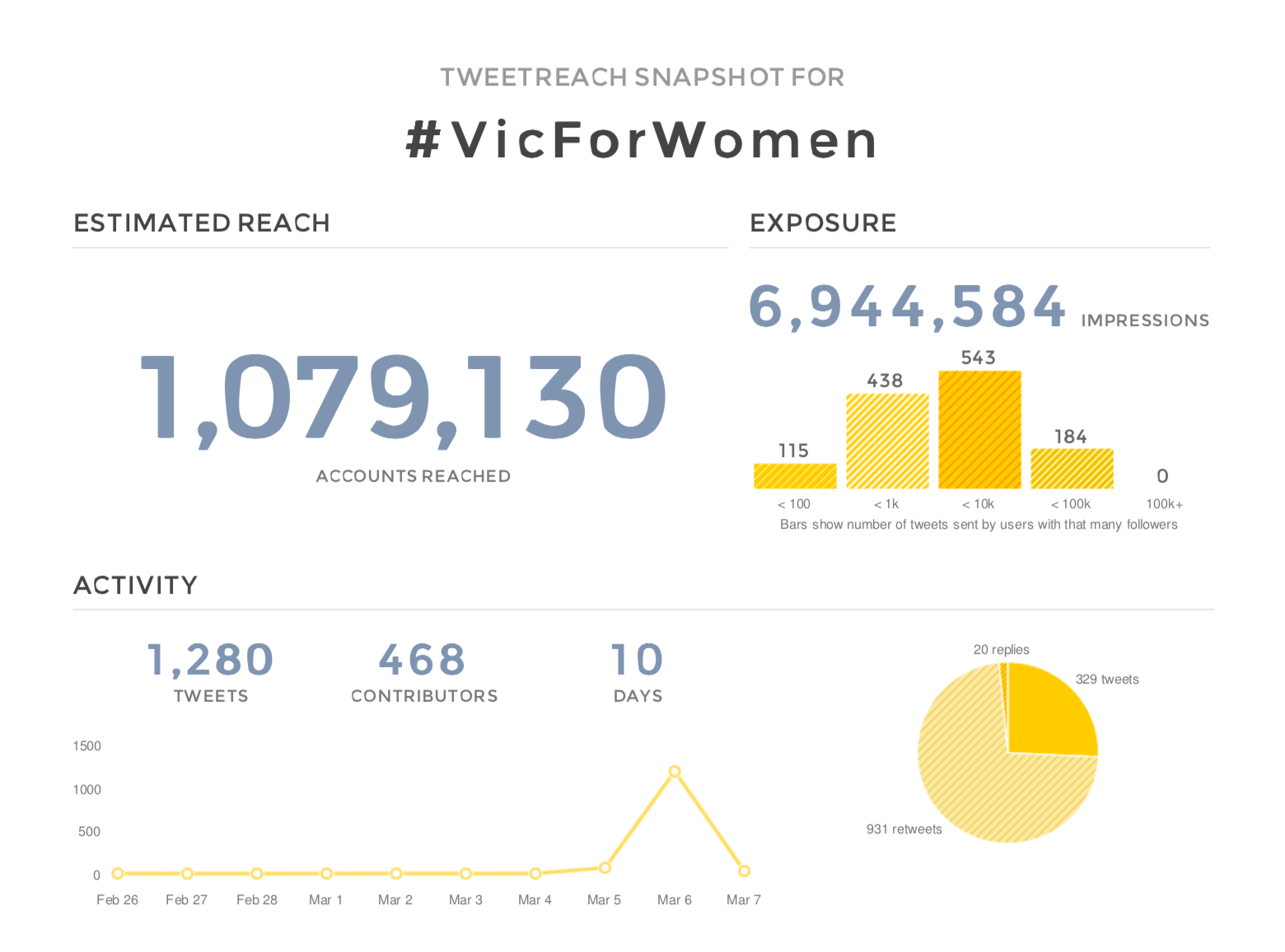 Approach:
• Creation of a suite of digital, content and social media assets to be shared through a content-driven social media PR campaign and amplified by offering them to constituents (sponsors, speakers, and supporters), constituent advocacy.
• Use of owned, earned and social media to drive awareness and interest.

Results:
• Suite of assets leveraged through new, traditional and vertical media ahead of, at and after conference.
• Trending for both days of conference, 1.4 million accounts, 4.9 million impressions, international media coverage print, radio, TV and social.

Brief: Vision 2020 Australia wanted to launch a social media campaign on ‘World Sight Day’ to help raise awareness of the importance of eye health. The campaign – #SnapForSight – was launched on October 8, 2015 and coincided with other eye health and vision care sector initiatives undertaken to mark the international day.

• Development of a campaign logo and visual identity to ensure a consistently strong visual presence across the multiple mediums employed.
• Creation of a campaign-specific microsite (www.snapforsight.com.au) incorporating social aggregation platform, Shuttlerock.
• Identification and preparation for potential reputational issues: What could go wrong, and how would we deal with such eventualities?
• Ongoing communication with Vision 2020 Australia’s member organisations to keep them abreast of the campaign and encouraging their involvement.
• Creation of a range of promotional social media ‘tiles’ (formatted specifically for Facebook, Twitter and Instagram) and uploading them to Dropbox making it easy for the aforementioned members of Vision 2020 Australia to share visual campaign content via their social networks. These promotional tiles included pre-campaign countdown content (i.e. a Facebook visual stating ‘3 Days to go’ for #SnapForSight’).
• Communication with key social media influencers in advance of World Sight Day, prepping them on the issue of eye health and the goals of the campaign, and encouraging them to participate.

• #SnapForSight hashtag trended on Twitter for Melbourne a couple of hours after launch and was trending nationally by midday.
• Overall, 417 published photos on the www.snapforsight.com.au microsite (aggregated using the Shuttlerock platform).
• Importantly, a higher than expected number of parliamentarians participated in the campaign, with 31 individuals posting a video or a photo to Facebook and/or Twitter, including Dr Richard Di Natale, leader of the Australian Greens, and the Federal Minister for Health, Sussan Ley. (According to Louise, such political engagement is important for a peak body organisation such as Vision 2020 Australia).
• News of the campaign was also picked up by Melbourne metropolitan media; editorial coverage included an interview with CEO Jennifer Gersbeck on Tom Elliott’s 3AW Drive program, and an article in the Herald Sun and Geelong Advertiser (included photo featuring Vision 2020 Australia Global Ambassador, Dr Jessica Gallagher).
• Over 100 radio stations nationally also carried a news snippet of the campaign (distributed via Radio Release).